Big Sandy, Montana (CNN) Her father worked the harvest every year from age 11 and was the strongest man she ever knew. When she was in high school, he once caught his foot in an auger, a long tube of a machine that pulls cut grain from a combine. He managed to yank himself free and drive his truck home without passing out.

Dick Tyler then hobbled into the house with his bloodied cowboy boot and mangled toe.
“It was reasonable and rational and absolutely necessary that he stop and come into the house and say, ‘I’m hurt. I need help,’ ” said his daughter, Darla Tyler-McSherry.
But two years ago, at age 82, as a series of mounting health issues forced him to step away from the work he loved, he didn’t have the same kind of language or strength to ask for help.
“We’re so good at talking about physical pain,” Darla said through tears, “but we’re so bad at talking about any kind of psychological pain.”
Darla is the director of student health services at Montana State University Billings. She is trained to spot depression and suicide ideation in students. But in her own father, she couldn’t see what was coming.
He took his own life on the very farm where he was born and raised. Afterward, his daughter struggled with guilt. She’s now determined to take her family’s anguish and use it for good by advocating on behalf of other farmers who may be in crisis.
Her motivation is to honor his memory — and because she knows that her family isn’t alone.
The suicide rate in rural America is 45% greater than in large urban areas, according to a study released last fall by the US Centers for Disease Control and Prevention. A more recent CDC report said Montana’s suicide rate leads the nation, coming in at nearly twice the national average. A third long-touted CDC study, currently under review, listed farming in the occupational group, along with fishing and forestry, with the highest rate of suicide deaths.
That occupational study was based on 2012 data, when farming was strong and approaching its peak in 2013, says Jennifer Fahy, communications director for the nonprofit Farm Aid. Farmers’ net income has fallen 50% since 2013 and is expected to drop to a 12-year low this year, the US Department of Agriculture reports.
Fahy says farmers are facing more stress now than they have since the farming crisis of the 1980s, when hundreds of farms were auctioned on courthouse steps across the country each month and thousands of farmers faced financial ruin.
That’s why now is the time to talk, Darla says. By sharing their own story, she and her older brother, Randall Tyler, hope others can be spared their — and their father’s — pain. 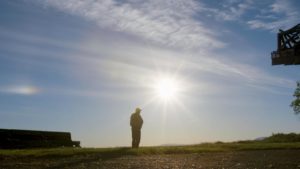 The 1,200-acre farm is nestled in the serenity of rural north central Montana, where crops stretch as far as the eye can see beneath an expansive blue sky. The summer breeze casts waves across seas of wheat.

Nicknamed for the grain that thrives in this region, Randall refers to the area as “the breadbasket of Montana.”
Unlike his sister, who left for college and took a job in the big city of Billings, Randall is pure country and was born to farm. He can quote the exact time he graduated from high school and was free to do what he loved: “May 26, 1982, 7 o’clock nighttime. Best day of my life, because me and school really didn’t get along that well.”
As a small child, he tagged along with his dad to the fields. He could identify whose land they passed in the pickup and the tractors each man drove. He took every chance he could to ride on the combine and watch his dad tinker with equipment. He was pint-sized when he took apart his green pedal tractor so he could “overhaul its engine,” he laughs. By age 5 or 6, he was steering a real truck between rows of bales.
“I kind of run on diesel fuel,” Randall said. “It just gets in your blood.”
Each morning, he tunes his radio to the Northern Ag Network to hear reports on the markets and the weather. Like all farmers, he says, he’s at the mercy of both. He used to work with his dad, growing and harvesting barley and wheat. Now, Randall is on his own to manage it all.
Darla sees their dad in Randall in the way he talks, moves and fixates on projects.
Randall misses the conversations after he and his dad each devoured the Trader’s Dispatch, a monthly publication catering to farmers, ranchers and the like that he calls the “farmer’s bible.” They bantered about the latest equipment for sale and who they knew who was selling what.
His thoughts turn to his father when he sprays the fallow field and passes the two knobs where they took a break a few years ago, field glasses in hand, and watched a herd of 200 antelope. He holds onto the good memories: the pack trip they took in the wilderness, the snowmobiling in West Yellowstone, the machinery they ogled at farm shows.
When Randall faces a predicament — questions like when to sell or where; what and how much chemical to spray — he says to himself, “Darn it, Dad, I wish you were here to make this decision.”
But he knows what his father would say: “Gotta keep moving, Randall. Gotta take care of the farm, keep it active, do what you think is right.”
Read the rest of the story & Watch Video at https://www.cnn.com/2018/08/21/health/rural-suicides-among-farmers/index.html