The following story first appeared in The Paducah Sun.
http://www.paducahsun.com/news/local/drug-court-therapist-retires-after-years-in-counseling/article_60ecc185-e7e6-556a-86bb-ccf6f7be5343.html 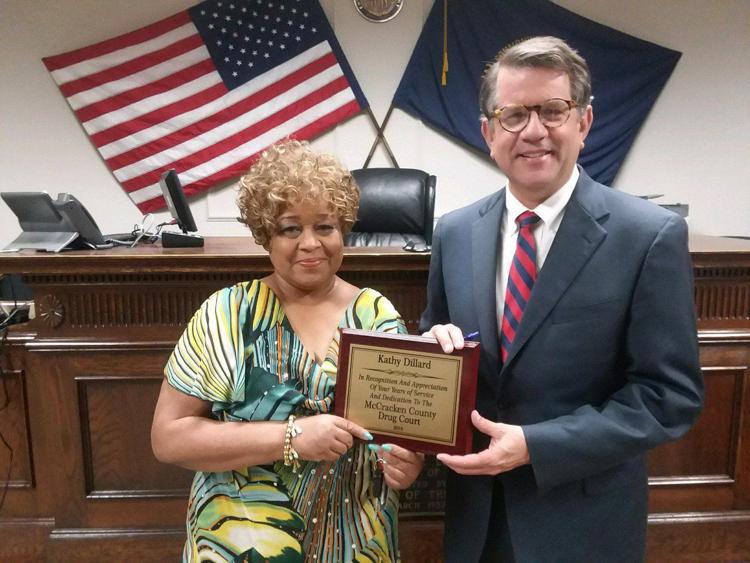 By DAVE THOMPSON of The Paducah Sun

When Kathy Dillard began her 34-year career in substance abuse counseling, she had no intention of working with judges and prosecutors as well as addicts who weren’t voluntarily seeking to better themselves.

“I had no desire to work with the legal system,” said Dillard, whose recent retirement marked the end of more than a decade working hand-in-hand with regional drug court programs.

Dillard took on the role as part of her job as a counselor with Four Rivers Behavioral Health and provided all counseling services for the drug court programs in McCracken, Livingston, Ballard and Carlisle counties.

“I provided all of the therapy in groups, individual (settings), and I attended all the court hearings,” Dillard said in an interview last week.

“If somebody wanted to see Kathy Dillard, she made time for them,” he said.

The judge praised Dillard’s dedication not only to the program in general, but also to the individuals she was helping. He honored Dillard with a commemorative plaque at the most recent graduation ceremony for McCracken County’s drug court.

“She knew those participants. She knew how they were doing. She knew what problems they were having and would offer solutions,” Kaltenbach said.

Dillard’s journey began with her own substance abuse issues.

“I had suffered from alcoholism previously,” she said.

Her experience in a local Alcoholics Anonymous program led to a passion for providing the care that she received on her road to recovery.

Her first counseling jobs, at the since-closed Goodman Hill Hospital and Parkway Regional Hospital, involved people who had made their own decisions to seek counseling.

But when her job at Four Rivers turned into working with court-ordered individuals, many of whom Dillard said often cared only about avoiding jail or having a felony removed from their record, her mission changed.

“Once I started working with those people, they didn’t know what they wanted,” she said. “Then it became my goal to entice them into wanting a different lifestyle.”

She’s since seen people improve their relationships with children, parents and their community through the counseling she’s provided.

“I actually found it more fulfilling because it was a challenge for me,” Dillard said.

She recalled one young woman she had worked with who had gotten into drugs and had turned to stripping to make money.

“Once she got into the program, we fought like cats and dogs. She hated me.”

Dillard said she recalled the day she knew she’d made a difference, when a well-dressed confident woman walked into the courtroom.

The woman has since gone on to have a drug-free baby, become self-sufficient and enroll in college.

“We’ve had thousands of others like her, that had no idea what their potential was,” Dillard said. Kaltenbach praised Dillard’s tenacious attitude, especially toward some of the harder cases the program has seen.

“People who were having problems in drug court avoided her because she had them figured out,” he said. “She didn’t tell them what they wanted to hear. She would be brutally honest with them.”

Among the four counties she covered, Dillard said she might have helped nearly 90 people through the program at a time.

Between court appearances nearly every day and all of her therapy sessions, including five group therapy sessions per week in McCracken County, Dillard said the stress could be intense. But the changes she saw in people who had been given up on by their families and society in general made the hard work rewarding.

“Most of the people we have, for the first time in their life, they drive legally, they pay child support, they regain custody of their children,” she said.

Dillard, a devout Jehovah’s Witness, said she plans to use her retirement to increase the time she’s able to spend going door-to-door to speak with community members.

But often, given her background, the conversations turn from religious issues into conversations about life and the issues people are facing, such as one recent interaction.

“I knocked on a door, and an older gentleman answered. We sat on the porch and talked,” she said. “He lost his wife, his mother and father, and two of his children within a span of one month.”

She said she was glad to be able to encourage him and give him someone to talk to before he passed away recently.